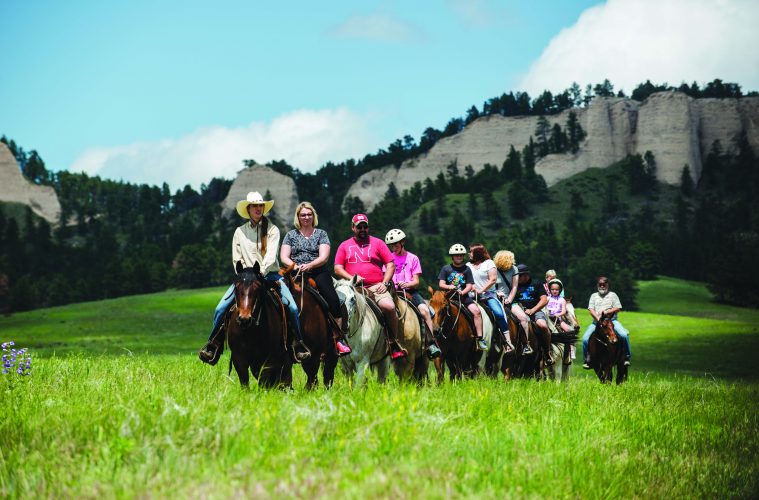 Four-and-a-half hours from Denver, far from the crowds and soul-crushing traffic, lies an oasis steeped in Old West tradition. It’s the far northwest corner of Nebraska, at the tail end of the 100-mile-long Pine Ridge land formation, and it’s fast becoming savvy Front Rangers’ newest get-out-of-Colorado destination. Here, you’ll find over 200 miles of trails for hiking, biking and horseback riding that fans out from two main towns: Chadron, a hip college hamlet, and Crawford, more traditionally cowpoke. Basecamp at either spot (or in one of the 15 public campgrounds nearby), and you can explore 169,000 acres of public lands, including two state parks, the Nebraska National Forest, the Oglala Grasslands and the southernmost ridge of the Black Hills. The land here remains largely unchanged from the pioneer days—meaning you can escape a Colorado one might argue is changing too fast in exchange for Nebraska where the trails and campgrounds are relatively vacant, the hiking and mountain biking are on par with with Front Range classics, and the towns are still humble little down-home places where the customer—not the dollar—is king.

You’ll be shocked by the hiking in northwest Nebraska. Here where the prairie meets a desert landscape that feels like Fruita, you’ll find canyons, creeks, sand hills and those iconic sand-and-clay formations made famous by the region’s northern neighbor, The Badlands. The trails at Fort Robinson State Park wind through buttes with names such as Lover’s Leap (4,163 feet, where legend says two young lovers from warring Native American tribes, who’d been forbidden to marry, leapt to their deaths); Trooper Trail (10.5-miles long and locarted in the Soldier Creek Wilderness Area and accessed from Fort Robinson); and the Norwesca Trail, a 5.2-miler that loops from top to bottom of Nebraska’s Pine Ridge in Chadron State Park. But Chadron local and Northwest Nebraska Toursim Director, Kristina Reeves—a native of Colorado—loves the three-mile Bison Trail, in Toadstool Geologic Park, which passes through a variety of landscapes including badlands, grasslands and Ponderosa Pines; the 1.4-mile-long Steamboat Loop Trail, in popular Chadron State Park; and the six-mile Spotted Tail Loop, at The Cliffs, Nebraska National Forest where abundant wildlife (wild turkey, white-tailed and mule deer) abide. Get thee to any of these, says Reeves, and you’ll forget that your favorite hiking was ever among the crowds in Colorado.

Mountain biking in Nebraska? Absolutely, says cyclist George Ledbetter, a former newspaper editor who has been riding bike trails in the region for decades. To reiterate: There are 200+ miles of riding in the 169,000 chunk of public lands that surround the towns of Crawford and Chadron. They include singletrack MTB trails through pine forests, across prairie grasslands and up steep buttes and narrow slot canyons. There are also plenty of “gravel grinds” down country roads with stunning views across wide expanses of prairie, the picturesque White River valley and the open horizon of the unique Nebraska Sandhills. Road riders, meanwhile, can rack up miles on well-maintained, broad-shouldered east-west Highway 20, a main route for many cross-country bikers, or north south on Highway 385, the Gold Rush trail to the Black Hills of South Dakota.

Ledbetter, a diehard mountain biker and gravel grinder, loves to churn along through the landscape on these three multi-facted rides: The Spotted Tail Trail, off of King Canyon Road, goes through open meadows and stands of pine trees. Parts of the trail area were badly burned in 2006, so don’t try this one at midday in summer. The 16.7-mile Buttermilk Loop (a gravel grinder), traces county roads and state highways. It features great views of the Pine Ridge forest and Crow Butte and crosses some Badlands terrain. And The Cliffs, located on the Nebraska National Forest, southeast of Chadron, offers multiple opportunities for mountain biking. Trails go up (south) to Table Road, with alternative routes for the return trip, including a thrilling ride down King Canyon. And get here on the third weekend of September for the 15-mile-long Twisted Crawdad Cameco Mountain Bike Race, sponsored by the Chadron Community Recreation Program in collaboration with Chadron State College. It’s a fall classic.

The U.S. Forest Service spent big money developing riding trails in the Pine Ridge area back in the early 1990s, according to Crawford local and lifelong horseman Don Huls. They start at various trailheads in Chadron State Park, Nebraska National Forest and Fort Robinson State Park, and they wind hundreds of miles through rugged, picturesque terrain. The Pine Ridge trails cruise through vast, open meadows, soaring buttes and stunning rock formations, that bring you back to long-gone days of the frontier. You’re on your own with your horse—one operation does “nose-to-butt rides,” says Huls, but it detracts from the experience. Each June, Huls and a group of local “outriders” (a term borrowed from the “good old trail days,” says Huls) host Ride the Ridge, with one- and two-day events. You head out with other horsemen, ride most of the day, and return to crazy-cool accommodations. Fort Robinson State Park boasts shady campgrounds for horse lovers and non alike, with electrical-hookup sites and primitive sites. Put your horse up for the night in one of the newly remodeled horse barns. There are plenty of lodging options here that can accommodate two to 25 people. Try one of the 1909 enlisted men’s quarters, or the former officers quarters (read: cabins) that date from 1874 to 1909. All feature kitchens, baths, living rooms and bedrooms.

No horse? No problem. Trail rides are offered all summer at Fort Robinson State Park and Chadron State Park. Want more? Our Heritage Guest Ranch north of Crawford rents horses you can ride on your own, offers lessons and leads trips on its property. For information on the 15 both primitive and non-primitive campgrounds in the Chadron-Crawford region, head to discovernwnebraska.com/campgrounds. To find Bed and Breakfasts in the area, check out the comprehensive listing at Northwest Nebraska High Country (nebraskahighcountry.com). For a sleep experience that’ll snub all of the #vanlife geeks, stay in a hike-to mobile sheepwagon, “the marvel of practicality and efficiency,” on grasslands and timbered ridges, with the proprietors of the RuJoDen Ranch (sheepwagonhideouts.com/ecosetting.htm).

Chadron’s Bean Broker serves food all day but their baked goods are to die for. Try the daily special, which uses location-grown herbs and local produce. The Snack Shop in Crawford, serves breakfast and lunch seven days a week. Hit up Q’s Dairy Sweet in Crawford for Texas-style barbecued beef, or hit the locally owned D & S Market in Crawford for small business offerings, which are always throwback and cool. Chadron State College students hit Wild’s Bar and Grill, for the fresh-cut locally rasied ribeye, or the Ridge, for its cowboy-size chicken fried steak. Cowboys, families, and other Crawford locals rave about the burgers, fries and ice cream, all devoured in an open-air setting, at Staab’s Drive-In (it’s only open in the summer, though). And for all the meat-lovers, EJ’s BBQ in downtown Chadron is sure to quench that craving.

Chadron’s Fur Trade Days is a throwback to the ERA when fur trading ruled the area—an important part of Nebraska’s history. Compete in the World Champion Buffalo Chip Throw and watch the parade, complete with a canoe race in Chadron State Park. It’s always the second full weekend in July. For more information, visit furtradedays.com.